Allowing Your Child To Fail

*This article is a 4 minute read

The passing of Former Secretary of State Colin Powell a man I greatly admired reminded me of one of his quotes:

"Success is the result of perfection, hard work, learning from failure, loyalty, and persistence."

Yes you heard that correctly, Failure is a great teacher. Unfortunately, parents often teach their children just the opposite. Even worse, we don't give kids the opportunity to learn from their own mistakes.

My son just started playing basketball. He isn't sporty. He never played the game before, but he tries his best. He doesn't want to make mistakes. Thank goodness his coach lets each player learn on their own terms without pressure. Last week my son's team lost by a wide margin. My boy had made a few errors. He was really down on himself about it. I told him not to worry.

"If you learned from your mistakes then you won't make them again. You learned your lesson," I told him confidently.

I added, "Basketball, or any sport for that matter, is a metaphor for life. You have to show up on time, be present, make your best effort, support team mates, and accept whatever the outcome is. In a nutshell, that's life."

I said that I knew he wasn't Michael Jordan. He wasn't there for that. He was there for other reasons. Relief came over his tired face. It was a breakthrough moment. One that couldn't be taught any other way, but through life experience.

There was another parent at the same game. They yelled at their child to pass the ball to another player repeatedly. Their kid finally told them to be quiet. The parent wasn't allowing their child the opportunity to gain knowledge from their own mistakes. This kid is a phenomenal basketball player, one of the best on the team. Twice this child passed the ball to my son when he asked for it. Remember that I told you that my son made some mistakes in the game? Both times my son missed the pass. The ball hit the ground falling out of bounds. His shoulder's shrugged. "You gotta be ready," said the couch lightly.

While I post pictures of my son making slam dunks on social, the reality is that I post the best shots. Playing basketball isn't easy when you're surrounded by guys trying to steal the ball from you. My son thought it would be easy, but quickly discovered it's hard work. 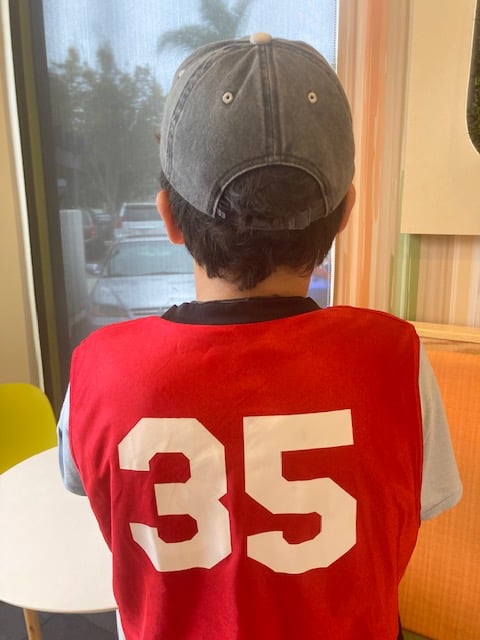 The next week we were running late for basketball practice. It's a twenty-five minute drive from our home. After repeatedly calling my son downstairs so we could leave, he haphazardly came down the steps. It took him forever to put on his sneakers.

"Oh great," I said. "Now we have fifteen minutes to get there. We're not going to make it on time." I wanted to speed on 8-East like a Formula 1 driver, but The Rock 'n Roll Marathon had other plans. "Oh no there's marathon traffic on top of being late!" I was so disgusted. I contemplated skipping practice. Who was I fooling? This must be a sign to quit I thought, but we persevered. If we were going to be late, so be it lesson learned, we weren't giving up.

As predicted, we arrived late to basketball. My son made five hoops during practice. I missed it because I was too busy glued to my phone. When the game started he missed a pass. He was having an off day. He threw his baseball cap in disgust. I got up to leave. When he's bad, or acting out, I wait in my car. So off I went, and he tried to stop me. I told him to just focus on the game and make his best effort.

I waited in my car. The seat cushions felt like a million dollars compared to the hard wood bleachers. A short while later I saw my guy leaving the rec center with a shiny gold medal hanging from his neck. He told me the coach gave him the medal for making five shots during practice, and he said to practice more at home. I congratulated him, and hugged him.

"You mean I'm not in trouble," he said puzzled.

"No of course not." I told him. I let him know that I was proud of him because he never gave up, and he never stops trying. Every day no matter what he's up against he always does his best effort, and the coach recognized that.

I was sad that I wasn't court side to witness the medal ceremony, but I am relieved that I am there to be his rocket booster in all of his endeavors. Through a sport that is a challenge for him, he is learning a new appreciation for hard work, sacrifice, and humility. Failure is a great teacher, if you don't believe me, just ask anyone who ultimately succeeded.